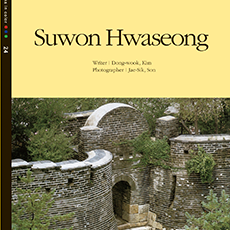 In the late 18th century, the small town of Suwon to the south of Seoul was transferred to a new place, and became a city. The name of the newly built city changed from Suwonbu to Hwaseongbu. Once the city took shape, a fortress was built around it. Hwaseong Fortress, an architectural masterpiece of the Joseon Dynasty was thus born. Jeongjo, the 22nd King of the Joseon Dynasty,played a great role in the construction of the new city of Hwaseongbu and the fortress. King Jeongjo, regarded as an enlightened monarch with innovative ideas, successfully completed his meticulous preparations, and his commitment and drive was necessary to take on the monumental project of constructing a new city and fortress. In 1997, Hwaseong Fortress was declared a World Cultural Heritage site by UNESCO. It became not only an honored piece of national heritage but a precious cultural asset for the whole of mankind. The purpose of this book is to explain when and how the fortress was constructed and to consider what value it has to us all. It is also hoped that this book will serve as a comprehensive guide for those who visit Hwaseong Fortress. - 본문 중에서 -